Uniswap is a decentralized exchange (DEX). It allows users to swap various Ethereum-based ERC-20 tokens from a simple web interface, as shown in the image below.

Uniswap is currently the most popular DEX. It has $2.1 billion secured in its contracts as of October 2020, which accounts for 20% of all value locked in DeFi apps. It also has a daily trading volume of $263 million, which makes up about 95% of all DEX trading.

Finally, it is the most popular DEX by usership, with 38,000 daily users.

The platform was created in 2018 by Hayden Adams, an Ethereum developer. Two other developers, Noah Zinsmeister and Dan Robinson have also contributed to the project.

This article focuses on Uniswap v2, which handles the vast majority of Uniswap trading and offers specific features. However, it should be noted that Uniswap v1 is still operational.

What Features Does Uniswap Offer?

As a DEX, Uniswap is more decentralized and, therefore, more flexible than many other exchanges for various reasons.

Any Ethereum-based token can be traded: The protocol does not have a listing process, nor does it charge listing fees. Instead, users stake their tokens in liquidity pools, which determines which tokens are listed. In Uniswap v2, liquidity providers can combine any two ERC-20 tokens into a trading pair without the need to use ETH itself.

Of course, not every possible trading pair is available, but Uniswap’s coverage is impressive. It offers over 2,000 trading pairs, according to CoinGecko, surpassing every other exchange.

Funds are not held in custody: Uniswap itself does not hold user funds; instead, funds are controlled entirely by smart contracts. These contracts handle every aspect of trading. Uniswap’s factory contract creates separate contracts to handle each trading pair, while periphery contracts support the system in other ways. 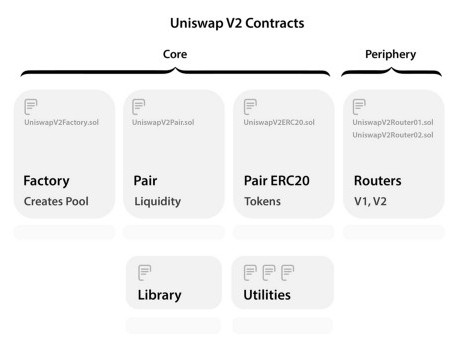 In practical terms, this means that funds are immediately deposited into users’ wallets after each trade is complete. There is no central authority that can seize user funds. This also means that users do not need to provide identity (KYC) information or create an account.

These features are all commonplace among DEXes.

No centralized orderbook: Uniswap does not use an orderbook to determine prices. Instead, it uses formulas based on token ratios in its various liquidity pools. Uniswap v2 also uses oracles that average price data over time. This approach is meant to produce more reliable prices and prevent price manipulation.

Developers can extend Uniswap: Developers have forked Uniswap and created variations such as SushiSwap, KingSwap, and Zuniswap.

They have also created custom interfaces, such as Uniswapdex.com and Uniswap.ninja, which provide access to Uniswap itself but with slight variations. Finally, exchange aggregators like 1inch can include Uniswap in their services.

Anyone can provide liquidity: Investors can earn revenue from Uniswap fees by staking their tokens in Uniswap liquidity pools. Projects can also fund liquidity pools to facilitate trading.

Competitive fees: The DEX charges a fee of 0.3% on each trade. These fees are close to industry averages: most other crypto exchanges charge 0.1%-1% per trade. (However, it is important to note that Ethereum’s gas fees can dramatically drive up trading costs; this will change when Ethereum developers solve that issue.)

What Is the UNI Token?

Uniswap introduced a governance token called UNI on Sept. 17, 2020. The company did not run an ICO or any other token sale; instead, it will distribute tokens according to a set release schedule. 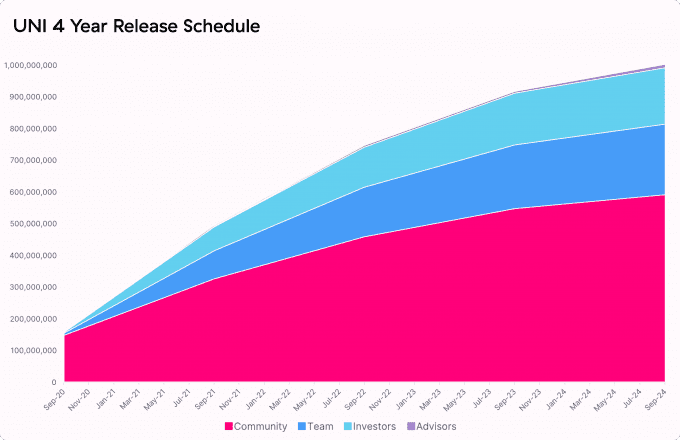 Uniswap ran an airdrop and offered 400 UNI tokens (worth roughly $1,500) to certain users who had previously used Uniswap’s services.

In the future, users will also earn UNI tokens by staking tokens in certain liquidity pools. This is called liquidity mining or yield farming.

The UNI token is meant to be used in governance. UNI holders can influence and vote on Uniswap development decisions. They can also fund grants, partnerships, liquidity mining pools, and other proposals. Soon, the Uniswap team will no longer be directly involved, and UNI token holders will make all governance decisions.

Investors can buy UNI tokens from several different exchanges, including Binance, Bitfinex, Coinbase Pro, Gemini, Huobi, Kucoin, and Uniswap itself. The token has proven to be a fast success, entering the top 50 coin listings just weeks after its launch.

How Profitable Is Staking?

As noted, Uniswap allows users to earn revenue by staking their tokens in a liquidity pool. The platform has attracted plenty of users seeking profit. Investors deposited most of Uniswap’s current locked value during a popularity surge in September 2020.

The standard 0.3% trading fee is split between all members of a liquidity pool. Naturally, pools that attract the most traders, but have the fewest liquidity providers, are the most profitable opportunities.

Additionally, this sort of investment opportunity carries risk: investors need to estimate losses due to changes in their staked tokens’ value over time. One commentator notes:

“It’s difficult to know what the trade-off is between revenues from fees and losses from directional movements without knowing the amount of in-between trades.”

The chart below explains how to estimate losses. For example, if token values change by 200% (on the horizontal axis), the tokens deposited will lose 5% of their value (on the vertical axis): 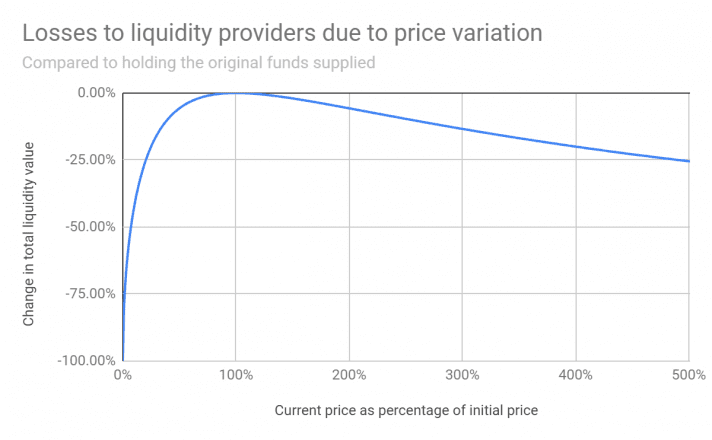 It is up for debate whether these are true thefts or risky but opportunistic trades.

Uniswap’s open listing policy also has caused issues. Fake tokens have been listed on Uniswap, misleading some investors to buy the wrong tokens. It is not clear whether Uniswap plans to blacklist these fake tokens; however, users can avoid the problem by carefully inspecting token IDs on the Etherscan block explorer.

Finally, some critics argue that Uniswap’s token distribution is not as decentralized as the project reports.

Analysis firm Glassnode argues that Binance and the Uniswap team have very significant UNI holdings, giving either group potential sway over the project, even if they do not exercise that power in the end.

Uniswap has already delivered on most of its potential. It is the most popular decentralized exchange in the crypto industry, and it is a highly convenient option for most Ethereum investors.

The project’s decentralization and open governance attempts mean that it is popular among blockchain advocates who oppose big crypto companies. Finally, Uniswap’s liquidity pools are attractive to investors who want to earn income on their holdings.

There are some limitations, though. Uniswap is not useful for investors who want to spend fiat currency or trade non-Ethereum tokens. Plus, there are a few minor safety considerations for users who are not familiar with cryptocurrency.

The protocol is also burdened by Ethereum’s high gas fees as of late 2020, though that problem will hopefully disappear in the future.

Uniswap has announced a native governance token, UNI, which has become the most valuable DeFi token in just two hours. In one fell swoop, Uniswap has dismissed its “fair launch” competitors…

Several major exchanges have listed Uniswap’s UNI governance token after the project launched the coin yesterday, marking one of the fastest mass token listings in crypto history. Which Exchanges List…

What is Rarible: A DAO for NFTs

What was once dismissed as a silly and expensive sector, NFTs give creators access to global markets in a way that’s never been possible before, and it’s all thanks to blockchain.Those familiar…