Black Friday came to cryptocurrencies last week when Bitcoin posted its roughest day in two months. But by Monday things were looking up.

Bitcoin is staging a comeback along with other riskier assets on Monday, bouncing back from its Black-Friday lows.

The largest digital asset rose as much as 3.4% during the session to trade around $58,266. Other coins also posted snap-backs, with the Bloomberg Galaxy Crypto Index adding 5.5% at one point. So-called alternative coins like Polkadot and Dogecoin gained too.

A brutal selloff Friday saw investors fleeing a number of riskier assets, including cryptocurrencies, with Bitcoin posting its worst day in roughly two months. The drubbing came after the announcement of a new coronavirus variant named omicron that was identified in southern Africa and which experts are now trying to understand. The session’s decline saw Bitcoin drop 20% below a record high notched earlier in November, which for many strategists showcases the coin’s tendency to closely track moves of the broader stock market. 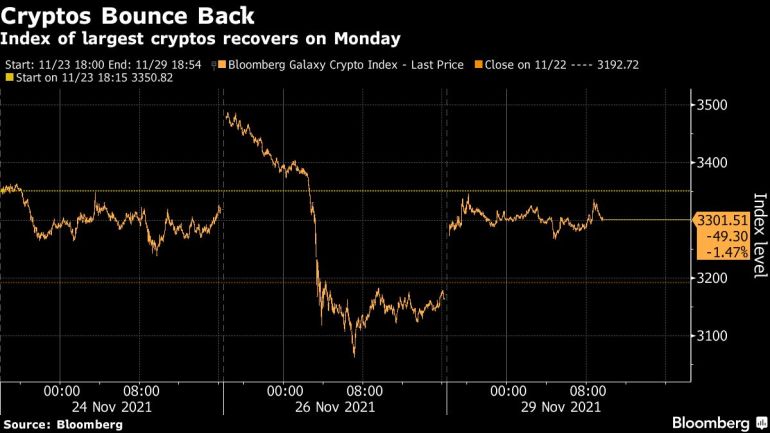 Meanwhile, in a development that is quintessentially cryptonian, a coin called Omicron crashed and then recovered as news of the eponymous variant spread. Though little is known about the coin thus far, data on CoinGecko.com shows it’s been in existence for a few weeks and that its market cap hovers around $370 million. 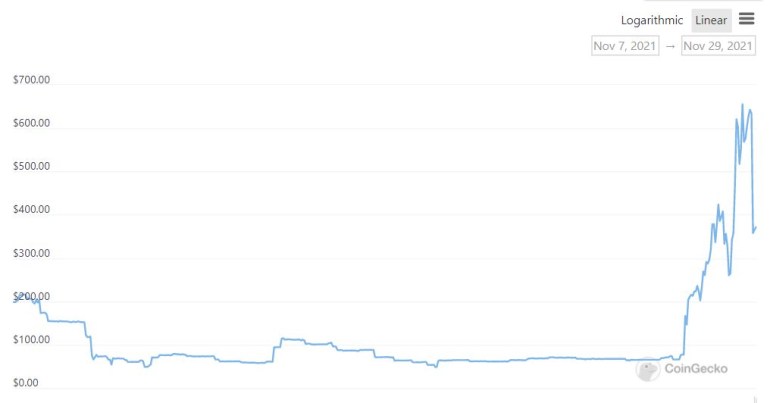 Bitcoin has been under pressure since reaching a record of almost $69,000 Nov. 10 on enthusiasm over the first U.S. exchange-traded fund linked to futures of the digital asset. But a multitude of factors have weighed on returns since then, including greater regulatory risks as well as many tokens having run up very quickly in a short period of time. Maley says that Bitcoin’s recent moves also show that should the Federal Reserve withdraw its stimulus in a more aggressive fashion next year, cryptos could become vulnerable.

Fiona Cincotta, senior financial markets analyst at City Index, says Bitcoin does tend to act like a riskier asset that tracks moves in the stock market, but that there are times when that relationship isn’t as strong — for instance, when hotter-than-expected inflationary prints come through, Bitcoin can hold up well during those periods.

“So there are times when I think Bitcoin does act as a riskier asset and it traces the stock market higher, but there are times as well when that’s not necessarily the case,” she said by phone. “It does have other contributing factors which drive it.”

Now, nervous traders are again turning to technicals for clues as to where certain cryptocurrencies could head next. Bitcoin on Sunday bounced off its 100-day moving average, an intermediate-term trendline. Meanwhile, Ether on Monday sprung off its 50-day moving average, which many chart-watchers see as a bullish development. 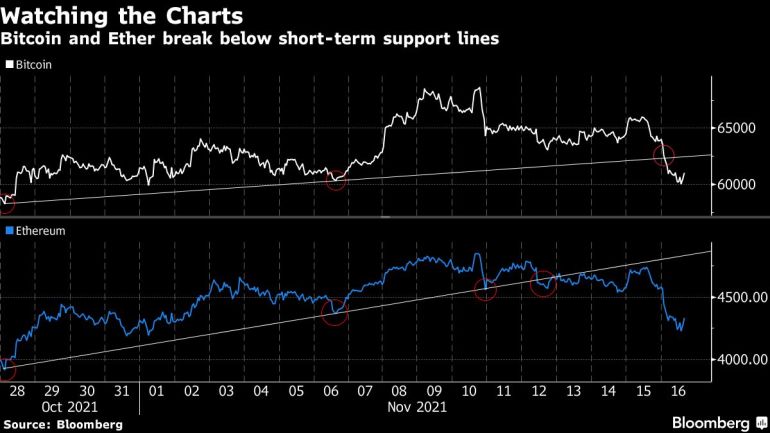 Still, Peter Tchir, head of macro strategy at Academy Securities Inc., says he was surprised by Bitcoin’s Friday selloff based on the coronavirus news. To him, it seems there is a group of aggressive risk-takers who own crypto and likely also own some high-flying tech stocks.

“They could be forced to sell one or the other if they move in tandem,” said Tchir. “Bitcoin going up relieves that pressure. Now that we’ve had what seemed like a likely rally — everyone dismissing omicron fears — we can see if it lasts.”